Shabbat Shalom from our bayit to yours! 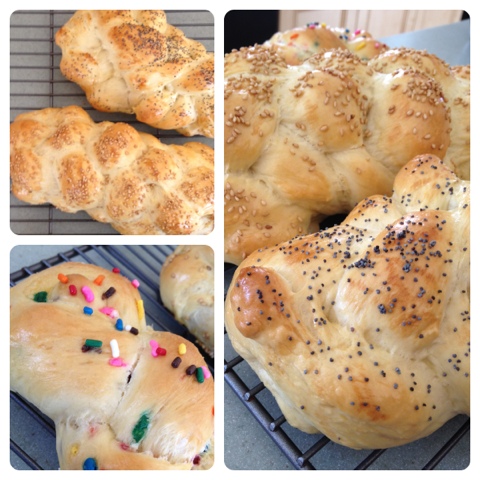 When I passed the baker's, the smell of fresh bread was so overwhelming I felt dizzy.  The ovens were in the back, and a golden glow spilled out the open kitchen door... There was a clatter in the bakery and I heard the woman screaming again and the sound of a blow, and I vaguely wondered what was going on.  Feet sloshed toward me through the mud and I thought, It's her.  She's coming to drive me away with a stick.  But it wasn't her.  It was the boy.  In his arms, he carried two large loaves of bread that must have fallen into the fire because their crusts were scorched black...

The boy took one look back to the bakery as if checking that the coast was clear, then his attention back on the pig, he threw a loaf of bread in my direction.  The second quickly followed, and he sloshed back to the bakery, closing the kitchen door tightly behind him... It was a good hearty bread, filled with raisins and nuts.

This is a bread that I've been mulling over in my head for a while and have been trying to figure out the best combination of ingredients.  I actually did two versions of this bread.  The first was sort of a Peeta's bread inspired challah (basically my 1/2 Batch with some mixed grains and other stuff thrown in).  I experimented with using applesauce instead of oil, and I really liked the result.  I'd like to try it again on a regular old challah just to see what the result is.  Stay tuned.

So here are the necessity's for Peeta's bread (in the book and in my humble opinion)...

So, without further ado, I bring you the first (in a series!) of Hunger Games Challah!
Peeta's Bread - Challah Version

I'm luke-warm on this bread.  It's fine.  But it's nothing special.  And I feel like the Boy with the Bread's bread ought to be something really special. I'm going to share what I did with you anyway.  But, it's not all that special.  Here's what I used... The result is just kind of lame.  I braided it, because Peeta might have braided it, I told myself. But I think I was stretching here.  It's not challah.  It's bakery bread.  And this was challah trying to be something it couldn't.  So, I moved on and tried again...

I've read a little about no-knead overnight breads, and I've tried doing french baguette once before.  I'm not ready to publish the baguette recipe here, because it's still in the works and still largely a conglomeration of a few other recipes but not really my own yet.  But for this loaf, I got creative and tried out my own.  Here's what you'll need... About the Dried Fruit:  Okay, I'm going to eat my words.  I used raisins.  I had some lying around from an Iranian Haroset I made during Passover (Still good, right?  They last, right?)  So, I used them.  But not a ton.  I added some chopped dried apples too, because I thought Peeta might have used those too.  Maybe?


What's really neat about no-knead bread is how you just toss it all together.  As I was making this, I commented to The Hazz who has never read The Hunger Games how much I liked to the idea of a long-rising bread.  A bakery would have the time, because they'd just start loaves as others were finishing and being sold.  But in District 12, they wouldn't have stand mixers.  So I opted not to use my lovely Kitchen Aid.  Instead, I just dumped all the ingredients except for the water in a bowl and pulled out my wooden spoon.  Once everything was all incorporated, we started adding water, mixing first with the wooden spoon before just going in with my hands. Once everything is incorporated, leave covered in at room temperature overnight for 12-18 hours (longer is better).  I read a few places about 70 degrees is preferable, but it's winter here, so I'm sure it's not that warm in my house!

Turn the dough out on a lightly flour surface and form into a shape that fits your Dutch oven or baking crock.  We don't have a baking crock (but now I want one!), so I used our LeCreuset Dutch Oven.  However, keep in mind that the standard knobs aren't oven safe to high temperatures (I think it's 325...?).  You can buy a replacer knob.  For the meantime, I took out my knob and flipped the screw so it was sitting on top.  Just make sure it doesn't fall in your oven and get lost!  (Note: I started with my 5 quart LeCreuset in red, but decided to switch to my purple 3 1/2 quart because Mark Bittman recommends a smaller size for an ultimately higher loaf.) Form into a log.  I tried to kind of tuck in my fruit and nuts so they were sitting at the bottom of the container (trying to prevent too much stuck to my pan).  Flip the log or round and lay on an oiled baking sheet on a lightly floured surface. (I messed this step up.  One site recommended oiled, but MANY, MANY others recommended floured bowl, cloth, or countertop.  After beginning to worry about my loaf sticking to my LeCreuset, I changed over to a floured surface.)  Let rest an additional 2 hours covered in a clean cloth. After 1 1/2 hours have passed, place your heavy baking dish (Pyrex, ceramic baker, or cast iron pot) in a cold oven and preheat.  For my cast iron pot, I preheated to 425, but you could preheat higher.  When the last 1/2 hour has passed, remove pot from the oven (carefully!) and plop in the dough in the pan (make sure to check one last time for any sticky parts and flour as needed).
Bake with the lid on for 20-30 minutes, checking to make sure it doesn't rise too much or brown too much.  Remove the lid and bake another 15-25 minutes.  I did 30 minutes with lid and 15 without.  Tip your bread out of the pan and let cool on a wire rack. The result? OM NOM NOM, you guys.  Wow.  Like, seriously, this might be the best thing I ever made.  It's soooooo rustic.  The crust is delicious and crumbly.  The inside is chewy just like what you would imagine from a bakery.  In fact, The Hazz said, "It's like REAL bakery bread." Would the Boy with the Bread be proud?  Is this his bread?  I like to pretend this is what it would have been like.  I'm not about to start burning this bread.  It's deliciously awesome just as is.  It takes time, but it's not time consuming.  You just have to wait.  It might actually be less hands on than most of my challot.  But the result is so, so, so worth the wait. Next up, well there are lots of breads in The Hunger Games.  I think next up in the books are rolls from the Capitol dipped in hot chocolate.  I'm game, are you?
May the odds be EVER in your favor! (and Shabbat Shalom!)
Posted by Amanda at 8:15 AM 9 comments

It finally snowed!  We've had 50s all December and up until January.  Not normal.  We should have had at least 10 inches by now and we've had only the past 4-6 that we received overnight!  Woo hoo! But... the Hazz and I had to get excited for the non-existent snow.  In December, we made our own little challah Frosty.  We started with three little balls of challah, flattened with our palms.  We then cut the hat out of a rolled piece (a square plus a tiny long line).  Coal eyes were chocolate chips and a piece of dried apricot for the carrot nose. Then we added an egg wash. Using a method that I learned from This Good Life on Polka Dot Challah a while ago. Dip your thumb in any left over egg wash and then dip in the sprinkles or topping. Dab on in specific place you'd like. We used cookie sprinkles for the scarf and poppyseeds for the hat. Then The Hazz sprinkled silver sprinkles over the whole shebang. You know, for snow. What we sort of forgot was that challah browns in the oven. So, he's Frosty with a tan.  He was delicious!  Tasted like a doughnut!! I've been meaning to do these for a while, but recently a friend of The Hazz's from JTS asked if I had a worksheet with my braidings. And, so, I made them! I hope that you will find these downloadable PDFs helpful. You may print them and make photocopies of them, but please do not alter them in any way or remove my logo :)

Shabbat Shalom from our bayit to yours!
Posted by Amanda at 12:58 PM 6 comments *{Footnote}* The recipe also lists lard as an option but given the difficulty in finding kosher lard, I went the vegetable shortening.
Posted by Amanda at 2:38 PM 5 comments